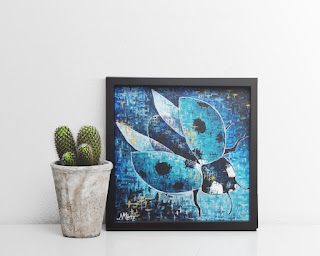 I always loved ladybugs. They look so cute, wth their shiny shields and fun dots. But they are ferocious predators. A contrast I can't help but love. As a kid I believed they brought good luck and still, so many years later, they brighten my day every time I see one.

“Jack, draw me like one of your French girls.” He raised his head. “What are you talking about? What is a “French girl”? And you know full well I am Norbert and not Jack! We might come from the same nest, but my spots are clearly bigger than his!”

Dilly was not impressed by his angry stare. She playfully swatted him on the foreleg. “Ow, you know what I mean! Like in that movie?” He thought about it. “Nope, sorry.” He was not sorry. Dilly had terrible taste in entertainment. “But you must remember! We watched it together…” and then softer: “… 5 times…” That made Norbert remember. Dilly made him sit on that windowsill night after night, watching the humans watch that awful story until it haunted his dreams. And then he tried to block everything out. He groaned. “Not that story with the female human and the male human on that floating thing where everything sinks?” In his not so humble opinion that male human was a terrible artist, and Norbert always thought the sinking of the male was a happy ending.

Dilly however, loved the movie more than anything. “Yes, that’s it!” Now Norbert also remembered the part she initially referred to. The tiny hairs on his legs stood on end. “I am an artist Dilly, I don’t do filth.” She screeched in protest. “Filth? How could you? It is so romantic!” She fluttered her wings in excitement. "And sexy too,” she added more quietly, though no less excited.

Norbert made a disgusted sound. Romantic. Bah! Sexy! The idea! He did not see the appeal in removing all shields and wings and having just a body left. It reminded him of the time when he was still young and the human bullies pulled the wings of his brothers and sisters.

Now, long slender antennae, slightly quivering against the wind, that was sexy! Or a full round shield, so bright it was almost pink. He sighed. No, he really did not understand humans. And after a look at Dilly, who was trying to get the pose right without rolling over, he admitted to himself that he did not understand females either.

“Oh Norbert,” Dilly teemed, “please? You are the most talented bug I have ever met. I am sure if anyone can make it tasteful it is you.” Well, if she put it that way. How could he say no to that? “But really Dilly, no pulling wings. It is not a horror show.” She muttered under her breath, but agreed. They settled on a middle ground: Shields up, wings out, body slightly exposed. Dilly sighed in delight, Norbert in resignation. He was committed now.

But when Dilly struck her pose and he gathered his materials, he could not help but admire the curve of Dilly’s shiny black bodice. And when he started to draw he noticed the soft lines on her back. Well well… Maybe those humans had a point after all... 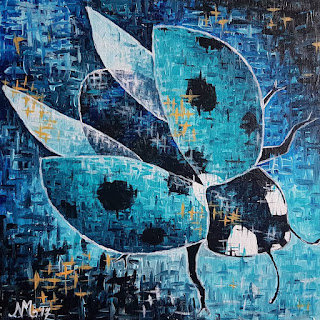 A painting and its story Acrylic Painting Pixelated Sold